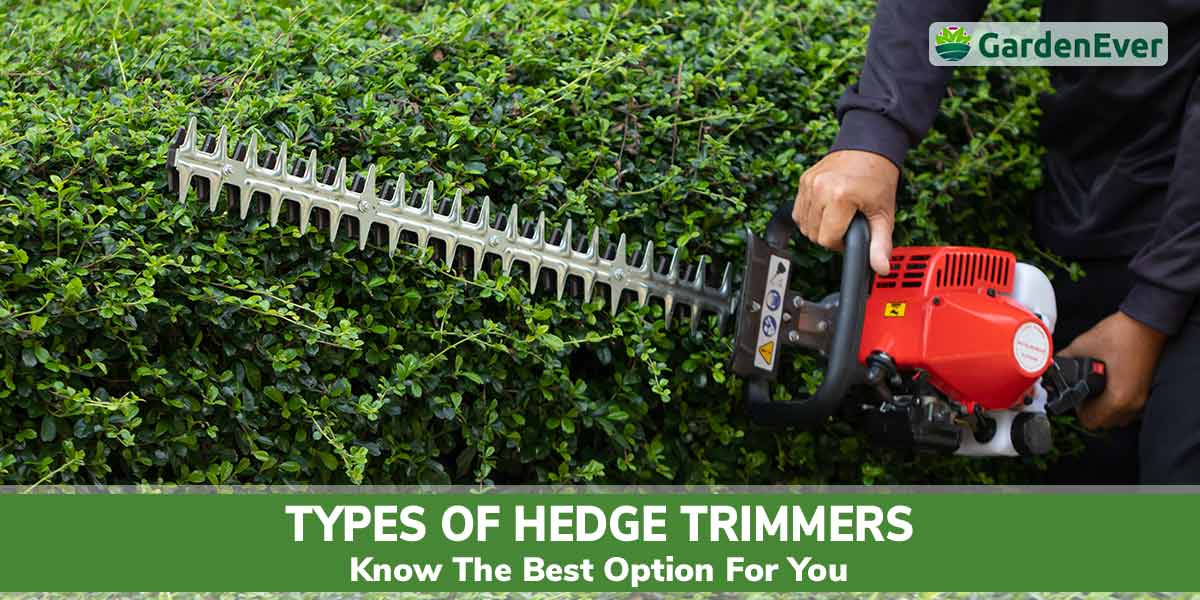 Trimming your hedges and trees is not a straightforward job. You’d regret the decision at some time if you try to get that done with shears. One purchase can bring about a considerable reduction of time and energy that you need to get the job done, and most people that have made the purchase are glad that they did.

However, convincing yourself to get a hedge trimmer was not the toughest decision you had to take, I know. Where it gets tough is to decide what’s the best model for you.

It all starts with – there are several types of hedge trimmers, corded, cordless, and gas, so which is the best fit for me?

Electrical hedge trimmers are those where the motor is powered by electricity. Yes, they have a cord that you have to carry around to stay connected to the electric line. In that sense, you can call them corded hedge trimmers too.

These trimmers are probably the most lightweight of all hedge trimmers. Since the power is coming through the cords, there’s no need to carry gasoline or a bulky battery within the trimmer.

They could be as lightweight as 5 lbs. Usually, they range from 5 to 10 pounds. Since they are so lightweight, they’re convenient to maneuver and thus easier to operate. Most people will be able to operate it without any hassle.

You can use it in those places where an electric power outlet is available nearby. The length of the power cord becomes crucial here. However, you can always add an extension cord to increase its reach.

The distance of the hedges from the power outlet mostly doesn’t stop one from purchasing an electric model unless it’s too far, and they’re rather concerned about the possible threats of electricity extension lines.

What might stop them is the botheration felt from the cords. Many people just don’t like dealing with wires and cables, and that might be an issue, rather than the length of the wires.

Another concern about electric models is power. They’re not the least powered trimmer, but not the most as well. They sit in the middle position. They deliver more power than most battery-powered (cordless) trimmers, but usually less than most gas-powered trimmers.

However, the power they deliver is mostly sufficient for most trimming jobs. If you assume that you have some groundbreaking jobs to get done, get a gas trimmer because electrics won’t be enough.

But if you’re into time to time light yet consistent trimming to make your hedges look neat, electric trimmers will meet that need of power.

However, some electric trimmer models deliver gas-like performance. So if you want the conveniences of electric trimmers along with similar power of gas-powered trimmer, those models are the ones.

Electric trimmers are much easier maintenance than gas-powered trimmers. Since there’s no such thing as the air filter, oil filter, etc. are involved that need to be taken out and cleared often, anyone with zero to minimal mechanical knowledge can take care of them.

No gasoline means no fumes, and they tend to get less dirty for this reason. That is why electric trimmers are much easier maintenance than gas trimmers. They’re also very quiet as there are no loud engines involved. Your neighbors love that.

However, there are not all wins. Despite so many conveniences, great difficulty could be handling the wires. It can be bothersome to take cables with you wherever you go. It’s annoying for other people of the house as well since they also have to deal with wires as you have an extension cord all the way from home to the garden.

It’s not only bothersome, but there are some risks involved, as well. You might accidentally cut the wires that got hidden in the complexity of the hedges. It could result in an electric shock.

That is why I highly recommend installing an RCD (residual current device) in the system. RCD is a device to monitor the flow of the current and immediately cut the circuit in any such hazard. And also, try to keep the cables over your shoulder and out of the way of the blades.

After all this, they’re usually relatively inexpensive and more affordable than the other two types (Cordless & Gas).

To summarize electric hedge trimmers, the pros – lightweight, easy maintenance, quieter, cheaper, the cons – not as powerful as gas ones, cable management.

Electric hedge trimmers are the sweet middle point and the best choice for most home users. The amount of power needed for lightweight day to day trimming jobs is not groundbreaking, and electric trimmers are capable of doing that.

In addition, they offer conveniences like lightweights, ease of operation, quietness and are cheaper. What else could one want, unless he/she’s a power user? (Hint: Consider gas models if you’re one)

As you can already tell, these are also powered by electricity. But the difference is the source. In this case, the power source is the battery instead of the electrical outlet. Since there is no cord involved this time, they are regarded as cordless hedge trimmers.

Lightweight than Gas one

Cordless hedge trimmers are still lighter than gas-powered trimmers by quite a margin. But they are not as lightweight as corded ones due to the added weight of the battery, which is not really ‘negligible.’

The battery adds at least 3-4 lbs of weight depending on its size and capacity. However, they can still be considered as lightweight for a hedge trimmer and still quite easy to operate by most users.

Hassle-Free from the Cord

The freedom here you get for that sacrifice is to move around without having to worry about the power cords. Since there’s no cord involved, you can go as far as you like and literally anywhere. People who get bothered by cables would find these ideal.

Cordless hedge trimmers are usually a little less powerful than corded ones. Since they run on battery, they tend to be the least powerful of the bunch, considering the ‘standards.’ Those models are for light trimming jobs where freedom to move around is appreciated, but the power of gas is not required.

However, just because they’re named ‘cordless‘ doesn’t mean they can be powerful. There are some models with 80+ volts batteries, which are really powerful and deliver actual gas-like performance. These are good for medium to tough trimming jobs.

So if you’re someone who needs a good amount of power delivery but appreciates the silence, simpleness, and environmental friendliness of electric tools, these models are a steal for you.

However, no matter how powerful the battery is, it’ll run out of power after a certain time, usually 40-60 minutes. This is one of the significant concerns regarding cordless trimmers. It’s bothersome if you have to charge the battery in the middle of the session.

Usually, most cordless trimmers will run you through a short session, but if you often need to trim for an extended period, consider purchasing another battery. Thus you can switch between sessions and have double battery life. It solves the problem to quite some extent but adds cost.

Just like corded trimmers, they’re easier to maintain as well. There’s no component that constantly needs to be cleaned other than the blades, and they get less dirty as well. And they’re quiet.

Pricier than Corded One

Cables won’t bother you this time, like corded models. However, cordless ones tend to be a bit more expensive than those corded trimmers, due to the cost added by the battery. They’re still cheaper than gas models and quite affordable as well.

To summarize cordless hedge trimmers, the pros – still lightweight, easy maintenance, quieter, cheaper than gas; the cons – not as powerful as gas ones, battery service time in one charge.

Cordless hedge trimmers are an excellent choice for those who have mostly light to medium trimming tasks to take care of. People who like the conveniences of electric trimmers but don’t like to deal with cords will also appreciate these highly.

Alright, now let’s talk about the beast of hedge trimmers. If you’re looking for power, gas hedge trimmers are the ones for you. It is very machine-like equipment that has a gasoline-powered engine running the blades back and forth.

Most Powerful and the Heaviest

This additional weight makes them harder to maneuver, so operating them is not as easy as corded or cordless ones. Especially someone who’s new in trimming may not find these ideal unless he/she has great strength.

But they’re not that resistant for someone used to trimming. It is why big boy gas hedge trimmers are not recommended for newbies. If he/she must get one, then there are beginner models out there too.

The mess of gasoline makes them a little harder to maintain, as well. You need to clean the air filter at a regular interval to ensure a clean flow of air into the engine. The fumes create a little mess as well, which you have to take care of.

But your neighbors probably won’t show much love for your gas trimmer. They make quite a lot of noise, and operating them without gardening earmuffs is a stupid idea, to say the least.

They also tend to be more expensive than corded or cordless models. There are some cheaper beginner models out there too. However, as I said earlier, there’s no alternative to gas hedge trimmers for tough trimming jobs, and the additional power makes light to medium trimming jobs easier – so they’re worth the money.

Gas hedge trimmers really provide that machine-like feeling. They’re expensive and heavier, but there’s no match to them when it comes to power. If you think you’re going to need or enjoy that additional power, there’s no alternative to gas trimmers for you.

Corded, Cordless, and Gas, all hedge trimmers have their perks and downsides. So, in the end, it comes down to individual preferences and choices to decide which is the best fit.

You should not get carried away by the awesome advantage of a particular model, instead consider all the aspects and choose the best fit for your needs and budget.