Patio umbrellas with LED lights installed look so beautiful when it gets dark around. On top of that, they make our life under the umbrella easier and beneficial with amazing functionality.

What you might be worrying a little about is the maintenance of those LEDs. And your concern is logical. As my friend Eric Bronson who’s the senior lighting specialist with Anixter International clearly states: LED lighting is not by any means maintenance-free.

Though the degree of maintenance required for simple umbrella LEDs might not be as high as other serious lighting projects that Eric was mentioning too.

For average, the lifetime of most LED lights is around 50,000 hours. That’s quite a lot for what we’re talking about, but to get those numbers, some sort of minimal maintenance is required.

It’s not about the cost of replacing LED strips that I’m concerned about, rather it’s about the effort needed to re-install the strips is what I want to avoid. Because surely that’s not an easy job which you could tell if you’ve read my guide on how to install LED lights on your umbrella.

If you’re on the same page with me, let us look at the few maintenance tasks to carry out to get the best performance and lengthen the lifespan of our umbrella LED lights. 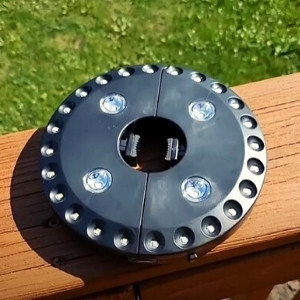 The prerequisite of having to carry out fewer maintenance jobs is to choose good LEDs in the first place.

There are countless choices of LEDs in the market and it’s important to get a good quality to remove any future hassle and also get good lighting.

Because no matter how well you maintain, a cheap quality LED light strip is bound to fail quickly.

All the bulbs don’t have to fail at once to make your lighting look dull, rather it takes a few bulbs to fuse out to disturb the wonderful sequence of lights in a LED strip, which is common for very cheap LED strips.

You also want to ensure that your LED strips have the appropriate color temperature that you’re looking for. It’s worth the little extra money to invest in a good quality LED strip to be able to rely on it for a long time.

Read User Manual before Use

We all avoid manuals in most of the products we buy and I’m no different. Thus, I learned it the hard way.

On my first kit of LED strip light, I messed up because of not reading the user manual. That was a little bit different kit I purchased and needed extra attention on one particular aspect.

But I was unaware of that because of not going through the manual and ended up wasting a few bucks of mine.

LED strips could be a little sensitive in terms of bending and a few other aspects. You want to spend 5 minutes to go through the manual to know your purchased kit well. There are often troubleshooting instructions as well so you’ll know how to tackle future complications if they occur.

High temperatures are one of the prime reasons for the failure of LED lights. Since your umbrella is meant to shade you from the hottest sun, the LEDs are bound to heat up in the process, which we can’t help.

Now, that solely won’t cause the LEDs to fail if you take care of it and prevent it from overheating for other reasons. For example, try not to keep the lights on for a long long time without any break.

Even a 2-minute break will help it to freshen up. Also, try not to keep it illuminated for a whole night if it’s not a must. And even if you have to, don’t forget to turn it off in the morning.

The constant high temperature will cause the LEDs to fail sooner than expected.

Use in Low Brightness

Most of the people that use LED strip lights on their umbrellas mostly install it for aesthetics purposes. Or at least, that is the significant reason. And that purpose is best served when you keep the lights in low brightness.

Dim LEDs kind of resemble the stars in my eyes. They’re perfect for a romantic outing with your spouse. Alongside this, keeping the LEDs dim helps to increase their lifespan and also keeps the temperature low.

There are instances where you might need to brighten it up, say the kids are playing around or you’re reading something while you relax on your outdoor sofa. It’s fine to brighten the LEDs up for that moment but when you’re done, your best bet is to lower the brightness.

This helps in both ways – to look the best and also lengthen the lifespan of them.

Patio umbrella LEDs are exposed to dust and debris so you want to clean them regularly. Especially you want to take care of the controller and make sure that nothing gets into there as that could lead to shortages and ultimately failure of the light.

Also, your light won’t look great if it has a buildup of dust over it. It’ll look gloomier. To prevent this from happening, consider cleaning the strip once in a while, which is an easy job.

Simply take a dry piece of cloth and wipe all the strips, including the controller. If there’s any stubborn buildup, work on that with a little damp cloth and it should come off.

Not all LED strips are waterproof. So your best bet is to buy waterproof ones in the first place since umbrellas are naturally exposed to water too.

Even if the strips are waterproof, the controller is not. If possible, you want to put it in a waterproof bag with just the remote signal receiver exposed.

Buying not-waterproof strips increase the chance of hazard through short-circuiting. The amount of work you’ll have to do to keep them away from water is a little too much. So be wise and get waterproof LED strips.

You want to perform occasional inspections of the LED light strips. If you notice they’re running dimmer than usual you may want to change the batteries and see if it fixes that. If not, there might be other problems which you may then troubleshoot.

Or one particular string could face hardships from the opening and closing movement of the umbrella, which could cause it to tear apart. If you catch that early, that’s an easy fix but otherwise might have caused the whole system to shut down.

This way, early inspections could help to prevent unexpected occurrences.

We may receive commissions on purchases made from our chosen links. Here is more about what we do