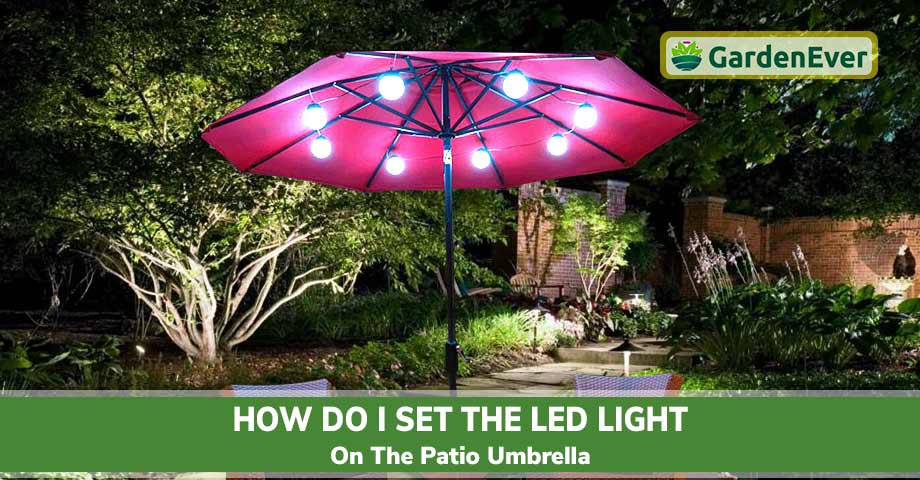 An outdoor space is not completely useful until you can enjoy it at any time of the day, regardless of the sun is there or not. And what if you can illuminate an area at night with the same tool that you used to get shade in the daytime, the opposite?

Setting up LED lights in your patio umbrella is the magic we’re talking about here. It’s an easy way to revamp an outdoor area.

They look pretty amazing and they’re useful from the functionality perspective as well. LED strip lights kind of look like a part of the starry sky over it.

Few top-end patio umbrellas come with LED lights pre-installed while others don’t. The models that come with light pre-installed costs quite a lot that so many people don’t go for them. But isn’t it possible to experience that luxury of illumination without spending that much?

Yes, you can always buy aftermarket lights and install them on your patio umbrella. Here’s how you do that –

How do I set the LED light on the patio umbrella?

You can get aftermarket LED lights in 2 forms usually. LED strips lights that go along the ribs and poles and LED disc light that connects to the umbrella shaft.

Here’s how you install LED strip lights on your patio umbrella:

1. What should be in the kit: The Unboxing

I assume that you’ve received your LED strip light kit already. Since these kits are quite cheap, there could be a chance of missing components in a few packages. So, unbox the kit and make sure that you have these stuff inside –

The Strip: The obvious. The strip usually comes in a coiled form. Make sure you’re getting the length that you had ordered. For a standard-sized umbrella with 8 ribs, I recommend the 64 feet long strip package.

The Receiver/Controller: It’s a little box-shaped component that controls the current flow of the strip so it lights up accordingly. It also receives the signals from the remote.

You could also make the lights flash in rhythm with the remote if your controller supports it.

Power Supply: Powering the whole unit is a basic power supply that looks like a phone charger of an old phone.

If you’ve got all these in the box, let’s move on to the next step.

2. Setting up The Strip Around the Umbrella

After you’ve come to the center, keep a little loop of the strip for the flexibility of movement of the umbrella. Otherwise, it might tear apart when you try to open or close the umbrella.

Having kept the loop (a little bit of extra and loose wire basically), work your way forth and back again like the first time to string another rib with the LED strip. Keep another loop and do another rib and in the same manner, cover all the ribs.

If you wish to cover the perimeter of the fabric, you can take the help of some mini clips and string them around the outside edge. LED strips on the perimeter look really charming and also provide lights underneath.

If you’ve string left still, you can wind them around the pole up to the center top. It ensures further lighting underneath.

However, if you intend to just keep the flavor underneath not a whole lot of lighting, you could omit any of the portions of these processes.

Pull a low voltage line to the umbrella and connect the power supply with it. Now you should be good to go.

Few models allow you to insert batteries in the controller so you won’t have to pull a separate low voltage electric line.

Turn on the strip lighting with the remote and enjoy the magic.

If you don’t understand any part, you could take help from this video:

How to install LED disc lights on your patio umbrella?

String lights are not the only option when you want to illuminate the underneath space of the patio umbrella. There are quite great disc led lights available that as you might have guessed, looks like discs.

Disc LED lights are much more convenient than string led lights as there is not a single wire that you have to deal with. All the lights are installed within the disc plate.

They also run on batteries so you won’t have to pull the electric line as well. Thus they’re much more convenient than string lights as there’s zero wire to deal with.

They’re also brighter than string lights and they’re mainly installed for functionality purposes rather than only aesthetics. If you often have dinner outside or do other things that you need good lighting for, you should try disc lights.

However, they’ll not look as good as strip lights so it’s a decision to make.

Installing a disc light is also much easier than strip lights and here’s how you do so :

Choosing String vs Disc light depending on Umbrella Type

String lights and Disc lights have their own advantages and disadvantages and you might choose one depending upon your needs – aesthetics vs performance. But there’s one more thing that you need to consider, which is the type of your umbrella –

Basically, we have two types of umbrellas – Regular and Offset.

On the other hand, you could use both strip and disc lights on a regular umbrella as the design is friendly to take advantage of both.

If you must install disc umbrellas on an offset model, look up a little if there’s any disc light that’s friendly to install on an offset umbrella. That might be a tough search but you could be in luck.