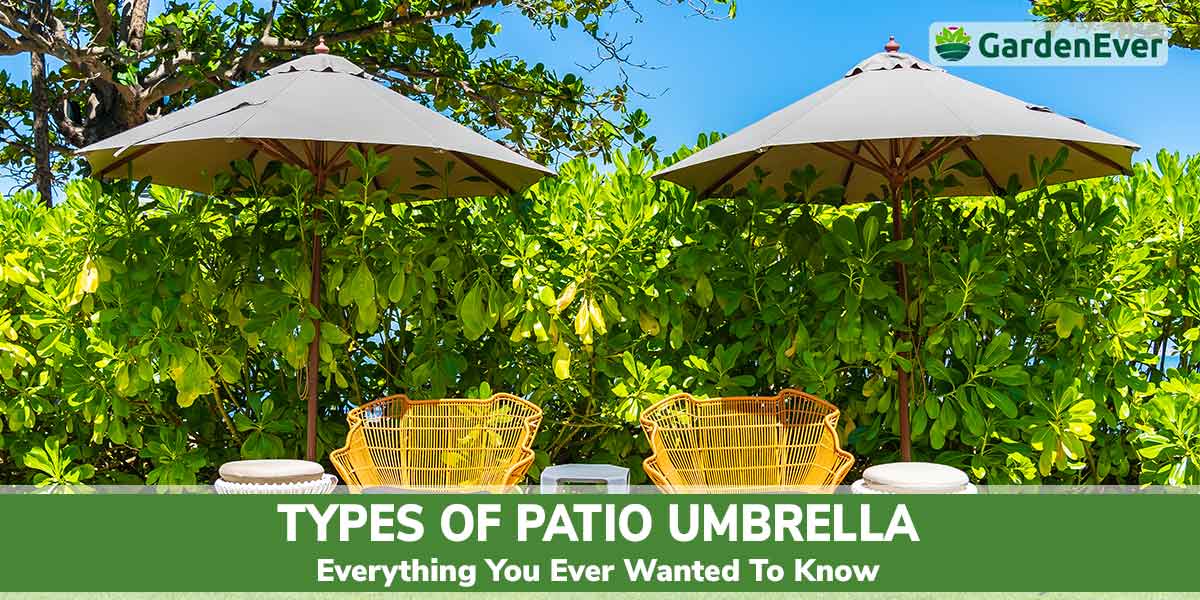 When you’re about to relax on your patio on a beautiful sunny day, the first thing that probably crosses your mind is – ugh, I’m about to get a sunburn. In fact, forget the sunburn, you won’t be able to bear the naked sun for more than a while.

That’s when you think of getting a charming & elegant patio umbrella that’ll not only protect you from the sun but also make your patio look more beautiful and well furnished. And believe me, there are still more reasons to buy a patio umbrella!

Now the confusion starts, what type of patio umbrella should you get? You barely know about them.

Well, not anymore after you get done with this piece.

Table patio umbrellas are probably the most common shade provider for patios. These look like over-sized umbrellas that you can hold in your hand. They make their place through a hole in the patio table made for them.

These umbrellas often come with their base so that they stand firmly by themselves and not have to put any undue pressure on the table.

Most patio tables have a standard 1.75″ hole for umbrellas, so you want to make sure your umbrellas pole fits into that.

You can use them at home yard or balcony as well if it fits. These umbrellas tend to be the cheapest one among patio umbrellas, and they’re the right choice if you’re in a tight budget.

However, they could be inconvenient to maneuver, and also they’re not great for all-day use as they can’t adjust with different positions of the sun.

As the sun moves over the course of the day, the angle changes the projection of the shade. Tilt umbrellas are designed with an additional joint where the pole and the umbrella are connected, which lets the umbrella to rotate around the pole rather than staying in a fixed position.

Thus you can adjust the angle of the umbrella to get shade at the very desired place keeping pace with the different positions of the sun. These are basically smarter versions of table patio umbrellas.

However, they can come in both freestanding and through-the-table version. Freestanding ones seem to be more convenient to maneuver, but they need a heavier weight (base) to stay in place firmly.

They’re also a little more expensive than standard table patio umbrellas, but they’re definitely worth the money to me.

The posh and luxurious patio umbrellas that you might have seen in many luxurious resorts or five-star hotels are probably these.

However, they’re not exactly the same as tilting umbrellas as the pole on these are designed to be on the side of the canopy rather than being in the center, like tilting and table umbrellas. There’s a long arm supported by the pole that holds the canopy.

Cantilever umbrellas are not only luxurious to look at, but they’re a lot sturdier as well and capable of withstanding almost anything that nature throws at them. The base is significantly heavier on these, and all the materials used to manufacture these tend to be higher in quality.

The pole and ribs and arms all are made from heavy-duty materials like hardened steel to prevent rust and corrosion. The fabric on the canopy is made of high-quality solution-dyed polyester and such stuff to avoid tearing.

They offer greater functionality, as well. You can move your umbrella up and down and side to side. And obviously, it tilts to a greater range of angles, so you get a precise shading area.

Cantilevers are made to be the best of the best patio umbrellas, and the closing and lifting mechanism seems to be smoother than other versions. However, this great looks and functionality do cost you quite more significant money, if you couldn’t already guess.

And cantilevers are much heavier than other models making it less portable, so it’s a better fit for you if you do not need to move the umbrella often.

Exotic umbrellas where the canopy is made of polypropylene faux grass cover that makes it look like a grass tiki hut. You can use it not only in the home yard, but they’re a better fit for the beach and pool.

The design and look of the canopy differentiate it from conventional patio umbrellas. They’re better at sunny and calm weather, but you can use this as a patio umbrella in windy weather too.

Should I call them umbrellas or they’re just canopy? Well, I’m not sure, but they do what an umbrella does – provide shade.

These umbrellas do not have any center or traditional pole like other models; rather, they’re designed as a tri-cornered umbrella piece that you can tie above a patio furniture set or table and also on the trees.

They provide shade on a larger area, and they’re popular among people having children.

However, sail patio umbrellas do not have any center pole doesn’t mean they’re just a piece of cloth that you receive when you order. Instead of one center pole, they have a maximum of three of them where three corners of the canopy are tied.

But you have the freedom to choose 1 or 2 poles in the umbrella pack if you have fixed mount points available at the place where you want to set it up. The poles could have bases, or they could be dug into the ground as well.

You can mount multiple ends from different canopies on a single pole as well if that’s firm enough. And you can choose multiple canopies in a single umbrella pack also.

Basically, you have all the freedom to choose the number of canopies and poles matching your requirements in one pack that is required to shade your patio or a portion of it. The prices go higher or lower accordingly, as well.

They’re not really portable when we take the whole setup in concern, but you can easily move the canopy around to set at a different setup as they’re easy to tie and untie. These umbrellas are expensive, and they’re better at shading large areas.

So, what do you think to be the perfect patio umbrella type for you? Let me know in the comments below. Shoot the queries, too, if you have any.

We may receive commissions on purchases made from our chosen links. Here is more about what we do